Markets sold off in volatile trade as retail investors wreaked havoc in heavily shorted companies.  The fourth-quarter earnings season continued to produce better than expected results, although it appears stock prices may already reflect the results.  The Jenniferuary FOMC meeting was expected with monetary policy staying in place while politicians continue to debate Biden’s 1.9 trillion dollar stimulus plan.  There was also plenty of mixed headlines on the coronavirus vaccine front for investors to interpret.  Economic data announced over the week was on the margin better than expected but did little to aid market action. 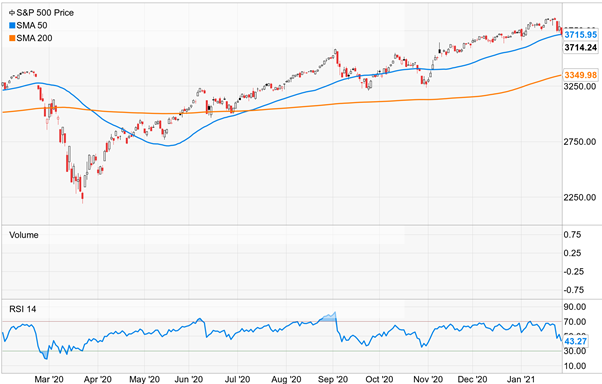 A massive short squeeze continued to develop in GameStop, which saw its stock price increase from $65 to $483. At the highs, GameStop became the largest market cap stock in the Russell 2000. Other names like AMC Entertainment, Blackberry, and Nokia showed similar market action. The action was so volatile that trade restrictions were imposed while custodians were required to raise additional capital to ensure trades would settle properly.  A movement by retail investors prompted by some social media influencers has sought highly shorted stocks to buy, forcing the shorts to cover and reconsider their positions.  Trading curbs and perhaps increased regulation are likely outcomes of these developments, which are likely to continue. 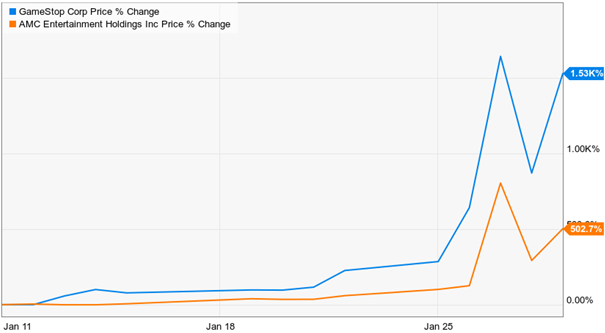 The mega-cap tech stocks were in focus last week with their fourth-quarter earnings announcements.  Apple announced its first-ever 100 billion dollars in revenues quarter, which topped analyst expectations.  Similarly, Facebook posted the largest quarterly revenues since Q2 of 2018.  Tesla and Microsoft also announced better than expected results.  However, stock prices fell for all these issues post earning except for Microsoft in what seems to be a situation where the better than expected results had already been priced into the stocks.  Dow, Honeywell, Caterpillar, and Chevron demonstrated similar price action after their earnings.

The Jenniferuary FOMC post-meeting commentary reiterated the Fed’s accommodative policy stance.  As expected, the Fed Funds rate range was unchanged at 0-.0.25%.  Fed Chairman Powell did suggest that Fiscal policy initiatives and the development of effective vaccines had been driving the recent market action.  However, fiscal policy initiatives continue to be mired in a closely divided Congress.  President Biden signaled that he remained hopeful that congress could get together and pass his 1.9 trillion dollar stimulus proposal and suggested that he may alter the budget to get the stimulus out if congress remains in a stalemate.

News on the Coronavirus vaccine front was mixed.  Moderna announced that its vaccine was effective against the UK and South African virus strains. At the same time, Pfizer’s CEO suggested that other variants of the virus could elude our current stable of vaccines.  Elsewhere, J&J announced that it’s one shot vaccine was 66% effective and that Novavax announced its Phase 3 trial candidate was 89.3% effective.

Economic data announced for the week was highlighted by fourth-quarter GDP increasing at a 4% annualized rate.  The figure came in just shy of the consensus estimate of 4.3% but showed resiliency given the increased lock-down measure taken late in the quarter.  Similarly, the final reading of the University of Michigan’s consumer sentiment index came in at 79 versus an estimate of 79.2 and the December reading of 80.7.  The slight miss also showed the consumer hanging in there.  Weekly initial unemployment claims came in down 67k to 847k, which was slightly better than the 875k that was expected.  Continuing claims fell 203k to 4.771 million.  Finally, new home sales were up 1.6% month over month or a seasonally adjusted rate of 847k.

The information in this Market Commentary is for general informational and educational purposes only. Unless otherwise stated, all information and opinion contained in these materials were produced by Foundations Investment Advisers, LLC (“FIA”) and other publicly available sources believed to be accurate and reliable.  No representations are made by FIA or its affiliates as to the informational accuracy or completeness.  All information or ideas provided should be discussed in detail with an advisor, accountant or legal counsel prior to implementation. No party, including but not limited to, FIA and its affiliates, assumes liability for any loss or damage resulting from errors or omissions or reliance on or use of this material.

The views and opinions expressed are those of the authors do not necessarily reflect the official policy or position of FIA or its affiliates.  Information presented is believed to be current, but may change at any time and without notice.  It should not be viewed as personalized investment advice. All expressions of opinion reflect the judgment of the authors on the date of publication and may change in response to market conditions. Due to rapidly changing market conditions and the complexity of investment decisions, supplemental information and other sources may be required to make informed investment decisions based on your individual investment objectives and suitability specifications. You should consult with a professional advisor before implementing any strategies discussed. Content should not be viewed as an offer to buy or sell any of the securities mentioned or as legal or tax advice. You should always consult an attorney or tax professional regarding your specific legal or tax situation. Investment advisory services are offered through Foundations Investment Advisors, LLC, an SEC registered investment adviser.